On August 08, 2015 my wife and I decided to get out of the stock market 75% into bonds.  Leaving 25% in the market.   We made this decision because my daughter will be going to private high school for 4 years and very shortly she will need money for college.

We asked ourselves 3 questions

I pull up the chart for S&P 500 over the last 20 years and I feel very uncomfortable with the current bubble in tech and the stock market in general.  You can see the 2000, 2005 bubbles compare with the recent highs made in S&P 500. 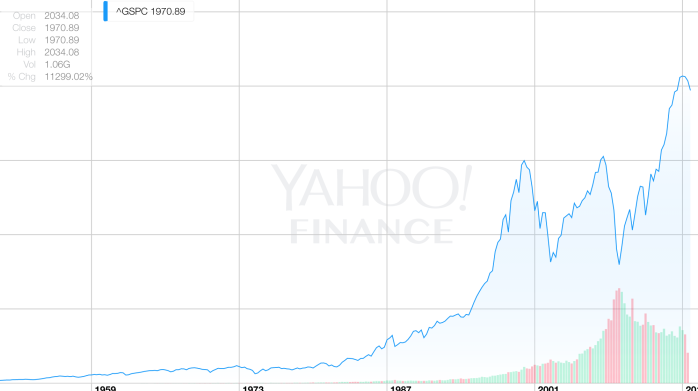 Then a week later, when I was looking at my Yahoo Finance app, the YHOO and AAPL stocks showed YHOO at $34.04 and AAPL at $112.08.  my daughter asked me what does the price mean?   I haven’t taken the time to talk with her about stocks and money in general and thought that it was a good chance to do that.

So I explained the price of stock doesn’t mean anything except for those people who bought the stock at a higher or lower price.  The worth of a stock is in it’s Market Cap, which is the price times the number shares.  Based on AAPL’s value, it’s roughly 18 times more valuable than YHOO.  Google is roughly 10 times more valuable.

She asked why don’t people just buy the stock and sell it again immediately.  I pulled up the charts for GOOGLE, YHOO and told her that it’s not possible to know when it’s a good time to sell or buy in the short term.  It’s just like gambling, you cannot tell the future.

Also I told her that working for a company that is publicly traded, like I am for Yahoo, it’s best not to pay attention to the stock price or you will be up for an emotional roller coaster ride.

For example, for GOOG from AUG 2014 to July 2015 the stock was down or just flat and did nothing.  If you were an employee who paid a lot of attention, then you were basically left with zero gain.  Only the recent euphoria did the stock pop.  If you bought Google stock, would you sell at the low, sell at the high or keep it for future gains? 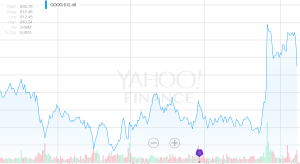 The people who buy the stock are mostly in it to make money and do not really care deeply about the product or the work that is done within the company.  So an employee should have the intrinsic motivation for the great work instead of the stock price.

Look at Twitter as another example.  Great product, great engineers.  But now that they are having a crisis because of the CEO stepping down, no user growth and a sinking stock price.  Does that make the work any less valuable and interesting?  Probably not.  But the morale in the company is sinking.  As a public company, the motivations can become too focused on the outside press and the stock price.

I think told her how much my wife and I have saved up for her tuition for college and since she is only 4 years away from college, I told her that I do not want to risk her college fund and I pull 75% of my S&P 500 stock investments into bonds.  I have a feeling that the stock market is heading for a correction of at least 25% to 50% because the ridiculous tech euphoria that is out there.  There are plenty of privately own tech businesses that are burning cash, loosing money and have no viable business plans.  There are people graduating from 8 weeks of tech training classes and getting offer 6 figure salaries.   This is a sign of an over heated market.

Finally she asked me if I was good at picking stocks.  I said I was horrible at picking stocks.  Because it requires high discipline, removing the common human weakness of not wanting to loose money.   That is why I told her I buy the S&P 500.  I told her, I’m pulling out of market based on my own uneasiness with the stock market and that we have to pay for college.

As for all stock market predictions, this a 50/50 gamble.  I could be right or I could be wrong, but I sleep better.